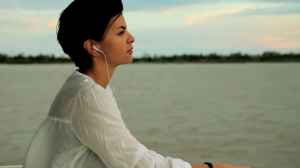 María Rosa Jijón artwork locates itself in the fringe where that storm known as development turns into a paradox.

Projects of modernity work – almost always – with the same system as Sisyphus’ Stone. They are repeatedly pushed to helplessly fall back again, unveiling that the so longed for goal of development and well being, is beyond reach, unachievable.

“Mas paradójico que nunca” originates from a video, presented at the 54th Venice Biennal of Arts, “La Paradoja Manta-Manaos” where an Amazon sunset, historical maps and ritual chants were assembled as a call against the destruction that was caused and would be caused by the opening of the Manta Manaus canal and modal axis. In a subsequent phase of the project Maria Rosa Jijon followed the routes to the Providencia harbour, in the Napo River, in the Ecuadorian Amazon. She also traveled from Manaus to Belem in Brazil.

The images she takes have both a documentary significance and pictorial language. No emphasis is put on names of coordinates of places, so that landscapes – both telluric and poetical – are imbued with a mystical non-temporal condition, and transformed in inner-looking geographies. This is the history of deliberate positivism that between the end of 19th and the beginning of the 20th century led to the creation of powerful projects doomed to failure. In that instant, Maria Rosa Jijon’s work winks the Werner Herzog, by inserting images of Fitzcarraldo (1982) the movie that narrates the story of the failed odyssey of Brian Fitzgeral, that attempted to build an opera house in the middle of the Peruvian rain forest. Mission unaccomplished: Nature won,

The movie offers – with its paradoxes – a never heeded call, silenced under the heroic and mighty wills that talked about progress and development in the 20th century and kept on putting these words in practice in the 21th century, without changing language and modalities, never pondering over those failed models that accumulated social and ecological debt.

The pictures follow the same thread: ruins with no clear origin, ruins that are there, decadent and absurd, almost moving, reminding a future that never came, looking into itself. The artist takes inspiration from the analysis and thought of Wolfgang Sachs, a renown pioneer in ecological thought. The scenarios of “Mas Paradojico que nunca” are aesthetic challenges, they disclose landscapes, generating an intimate   experience that can be traced back to what Edmund Burke defined as a “sublime encounter”. Sometimes these scenarios take the form of an activism that is not limited to the production of a pamphlet, in its awareness of the impossibility of stopping history, as per Benjamin’s warning, but rather bring about the possibility that arts can trigger social transformation, and become a space of reflection and constant questioning.